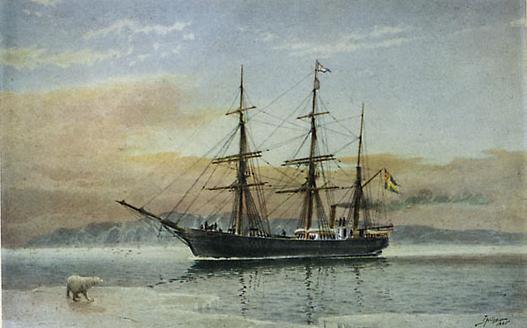 SS Vega was a Swedish barque, built in Bremerhaven Germany in 1872. She was the first ship to complete a voyage through the Northeast Passage, and the first vessel to circumnavigate the Eurasian continent, during the Vega expedition.

Constructed as a whaler, the vessel was acquired and rebuilt for Arctic exploration by Nils Adolf Erik Nordenskiöld with financial assistance from King Oscar II of Sweden and others.[1][2] On 22 June 1878 the ship set out from Sweden through the Northeast Passage around the north coast of Eurasia. Blocked by ice on 28 September of that year only 120 miles (200 km) short of the Bering Strait marking the eastern end of Asia, the ship was not freed until 18 July 1879. Two days later East Cape was passed, and Vega became the first ship to complete a voyage through the Northeast Passage.[1] Returning by way of the Western Pacific, Indian Ocean, and Suez Canal,[3] Vega also became the first vessel to circumnavigate the Eurasian continent.

After the expedition Vega returned to her original trades of whaling and seal hunting. The ship was reported sunk in Melville Bay west of Greenland in 1903, sailing under the Scottish owner Ferguson of Dundee.